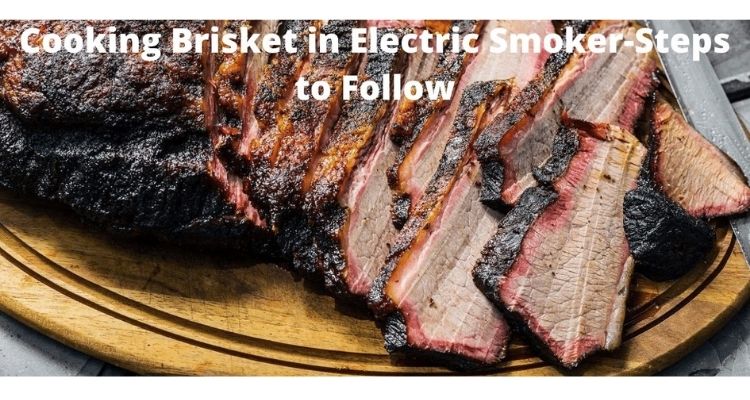 In an electric smoker, smoking brisket is the food you would try on priority. Cooking brisket is not so technical on its own, but when it’s about quality and deliciousness in the food, you have to be vigilant at every cooking step. Charcoal or Propane Smokers are there in the market to do the job for you. No doubt, it a bit difficult cooking in the propane smokers. But, smoking a beef brisket in an electric smoker is entirely a different story and a bit easier.

This article will share the elaborated steps and concepts for smoking brisket in an electric smoker with you.

Choosing the right stuff for smoking brisket is a crucial task. Getting a bad idea for the brisket will ruin your day.

A brisket or a packer brisket comes from the breast section of the animal. The area under the first five ribs comprises the brisket. The brisket is a large cut that is sold boneless generally weighs 8-15 lbs (depending upon the size of the cattle). It is usually bigger.

Not everyone would like to smoke this hefty size of the meat, for it may not be your need. To put ease, the whole brisket is further divided into two portions.

In the first stage, the cut of the brisket matters a lot. Select the brisket, which is precisely flattering on the top. If a brisket does not contains a flat surface, resultantly, it will be unevenly cooked. Additionally, the brisket must not be less than an inch at the end, if it is then trimmed that off or it will dry out during the cooking. If we come to the top layer of fat, it must not be more than an inch.

If the top part of your selected brisket contains a lot of fat, then the marination would not pass into the muscle technically as it will drip down while the fat will burn on exposure to the heat.

In the end, the fat and collagen which is inside the meat matter a lot.

Secondly, the quality of a good brisket lies in its tendency of bending. Suppose you have a 5lb brisket, and you want to know whether it is eligible for good smoking or not? Bend it, yes, the more the meat bends, the better it will be. In other words, if a brisket has lesser connective tissues, it will turn easily. Which in return produce a finely tender food

Thirdly, for a juicy brisket.  Make sure that the 5lb brisket piece has enough fat marbling. Upon heating, the fat marbling will convert into juice and absorb into the meat, creating aromatic flavors and finally producing juicy food. It is the best choice if you love to have a juicy brisket. “Brisket is considered to be one of the strongest muscles in a cattle. This healthy muscle requires an extensive network of connectivity tissue. When to burn down slowly, these connectivity issues will produce an incredibly soft and tender piece of brisket.

The point cut brisket is fattier. Its shape like a triangle and will produce an incredibly juicy and soft Brisket at the end.

On the other hand, the flat brisket is a bit expensive as it is easy to cut and looks good. A flat brisket is easier for the smoker as it will produce consistent results and extreme tenderness.

The next stage is the trimming of the brisket. You don’t need to do much with the trim. Just following actions

Commonly, a brisket, with the normalized temperature are available. It is difficult for a beginner to decide whether to use the frozen piece for a smoker or bring it to room temperature.

Now add your best electric smoker with wood chips of your taste. For a dense smoker, some said soak your wood chips for at least 1 hour before you started smoking. After that, wrap the wood chunks in aluminum foil. Now put them inside or inlet of the Electric Smoker.

Preheat your electric smoker at 225F and set the internal meat temperature to 190F. Don’t forget to stick the meat probe at the thicker part of the brisket. Place the brisket on the rack of the smoker. Now you can press start on the control panel.

Placing Brisket in an Electric Smoker

Suppose you are using a smoker where you need to put wood chips by opening the door. When doing this, you can flip the brisket so that the meat can be done equally on both sides. On the other hand, if you have a smoker with an inlet loading for wood chips. Flip your 5lbs brisket after somewhere around 2-2.5 hours.

The brisket needs to be cook around an hour per pound. For example, if your brisket is 5lbs (after trimming), it must be well-cooked within 5 hours. This time fluctuates depending upon what kind of brisket you have and the outside atmosphere. In the colder weather, it will take a bit longer.

After being smoked for hours, you will be waiting for the final cook of the brisket. In the case of an electric smoker, as you have set the inside temperature at 190F.

Use a meat probe to quickly check the meat’s core temperature if your smoker does not have a built-in meat probe. A separate meat probe is worth vital because you have to take different readings from the brisket. After all, the brisket’s temperature depends on the quality of the smoker and extreme weather.

How to Carve a Brisket?

Spending almost 5 hours cooking a brisket in your electric smoker, you can’t give up on the beautiful carving of a brisket. It is an art itself.

Place your chunk of meat over a well-sized meat cutting board. The cutting board must not as exact size as that of a brisket. It must be a little larger than the brisker so that upon cutting, the slices would not get scattered out of the board.

Besides this, the board’s quality is as good as that the knife cannot leave any marks on the board.

For cutting even slices, use a sharp knife, could be 10 inches so that the brisket me not be scattered and reflects an excellent beautiful cut.

Starting from the pointed side of your brisket, start cutting in a narrow piece. The width of a brisket slice must not be more than an inch. It is good to cut the brisket in “to and fro” motion of a knife instead of giving a pressure cut.

Continue cutting till the middle of the brisket. You will find two muscle partitions right in the middle of your cooked brisket. You have to wait here and take the big uncut chunk aside. When you look inside the brisket from the cut part, you will quickly see the two muscles here. The juice will be dripping out on small press of beef.

You have to cut that part differently than you have done before. Rotate the brisket at 90 degrees while the already done part toward you and the other point part at opposite direction. Some people love to cut that part in two. I’m not too fond of it as it will give an unstable cut, and you may lose a rhythm.

On the right side of the brisket, you will find a little chunk of fat. Cut that down and dispose of it as it is no longer reasonable to serve. Start cutting against the grain this time, cut a bit thicker as it is the softer part of the brisket, and stop when you are done all.

Here you have your nicely sliced brisket.

Once the brisket cut down and presented to serve, it would get dried soon. So you can either use a home-made sauce or you can also go for smoker already available sauces for brisket.

However, I have never done this as the brisket itself is all. It has all its flavor inside.

Smoking a delicious brisket is always a dream of every food lover. Whether you are doing it for a recreational purpose or you are doing it for the sake of profit. You always need a perfect smoker for that. Besides this, a complete guide for smoking a brisket must be followed in order to get the optimal results. Be vigilant and remain concentrated throughout the smoking process is the key to get the best result.

Hi! I am Jeff the smoker man. I gave that name to me for a reason that I spent more than 3 decades of my life in smoking and grilling. I have seen thousands of smokers from manufacturing stage to the delivery point. So, it is a pleasure to share my experience with you guys. Keeping in touch to this profession is my passion. Here I will share the unbiased suggestions for the smokers and grills with some worthy information.